Art and animal resistance: scenes from a world without exploitation – an interview with Hartmut Kiewert

Art and animal resistance: scenes from a world without exploitation – an interview with Hartmut Kiewert 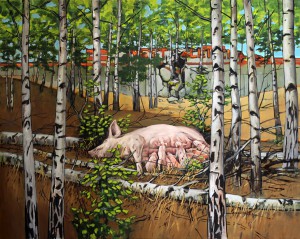 Hartmut Kiewert (http://hartmutkiewert.de) is a german antispeciesist artist. In his paintings he represented animal exploitation and the desire for world in which that exploitation will be only a memory. With his works he participated to many events for animal liberation, as the 3rd European Critical Animal Studies Conference (Karlsruhe, 2013), the International Animal Rights Conference (Luxembourg, 2013), the Conference for Critical Animal Studies (Prague, 2011).

We addressed him some questions about political meaning of his paintings and the topic of animal resistance.

Your pictures show an interest which is not only artistic, but also “political”. You expose violence and enslavement of animals, and it seems that you show the capability of animals to act for themselves. They escape, they rebel, they (symbolically?) lead people to revolution, as you show in your version of “Liberty leading the people” by Delacroix. It seems that you’re familiar with the idea of an animal resistance… How is this idea present in your work?

I consciously relate my work to political contexts and the contexts of social movements, in particular the animal liberation movement, of course. It is my intention to offer reflections on the contradictory and violent human-animal relationships with the means of art and create new access points to the topic. Discourses do not only take the form of text or language, but also the form of images. Painting has a long history of reflecting human-animal relationships dating back to very early cave-depictions. I think it’s an adequate terrain to renegotiate these relations.

In my newer works I try to show utopian perspectives on these relationships. Utopias of a world post animal exploitation. I try hard to avoid anthropomorphism, like it is customary in most art. Usually art has reproduced the relationships of domination towards the other animals using them as areas for projections or as mere metaphors.

Thus yes, I’d like to portray nonhuman animals as actors, who are shaping their own environment according to their own terms and who are leading and creating their own lives, just like humans. Nonetheless I also remain surprised at the real instances of nonhuman resistance that illustrate just that point: That they are subjects and no commodities or property.

Your reading of my reinterpretation of Delacroix’ “Freedom for the people” is interesting. I hadn’t thought of animals animating people to revolt – a lovely thought! Painting it, I had a more ordinary view in mind of humans liberating animals. But that’s a powerful feature of images: They have the ability to produce new ways of looking at things, that in some cases were not even known to the author.

Another picture that we found very interesting is the one called “Nest” (note for italian public: the building in ruin on the back is a big meat industry). It seems to refer to human resistance, what we call “Resistenza”, i.e. the struggle of liberation against nazi-fascism (it recalls the scenes of antifascists taking a break in their actions). Where does the idea of this picture come from?

The Idea of this painting was to transfer so called „farm animals“ – in this case pigs – from their surroundings assigned to them and created by humans for the purpose of their exploitation to an entirely different environment. I frequently use this idea in my art. Either into bourgeoise interieurs or, like in “Nest”, into freedom in front of the ruins of the animal exploitation industry. By means of this transfer I want to open other views on so called „farm animals“ and spread the idea of animal liberation.

In your pictures we see many “landscapes” left by human exploitation. They are inhabited, taken back by free animals. Do you imagine this vision could be reality? How could this change be possible, the transition from industrial farming to a world in which animals can self-determine their lives?

Well, first: yes, I think it is possible – and by any means desirable – to abolish animal exploitation, like it is desirable to abolish all other forms of exploitation and domination as well. Of course I have no knowledge about how a world without domination can look like in any detail, nor which is the right way to get there. But I’m quite certain that real liberation can’t be brought about by hierarchical structures, but only by counter-structures to the existing bad. By grass root movements that embody the utopian visions in their own struggles and that constantly reflect on whether they are not themselves falling back into structures of domination. It’s certainly no easy path, but millennia of having ideologies and social institutions of domination and violence are not something that you can lie down like an old and uncomfortable cloth.

Because the ideological mechanisms that legitimate animal exploitation are intimately tied to the mechanisms that legitimate exploitation and discrimination among humans, animal liberation and human liberation are the two faces of the same coin. Thus even though on some of my paintings there are no humans and only animals, I would by no means maintain the position that everything will fall into place when humans would just abolish themselves. Human animals are neither good or bad in and of themselves, but the ways that they structure their societies can be good or bad.

The only aim of capitalism is to maximize profit. To satisfy the needs of humans is always just a by-product or the drop-off of capitalism, never the goal of capitalistic production. That is the reason why thousands of people still die of hunger, even though there is more than enough productive recources and food. But due to ownership stuctures a lot of people can not even access the most basic things they need for their lifes. So with no doubt capitalism is a very bad and crazy form of organising economic reproduction. So we have to try to find other ways of organising our societies, that overcome not only animal exploitation, but also capitalism, racism, nationalism and so on. Because all the different forms of domination and oppression are stabilizing each other, all the different social movements should find ways to relate to and to support each other and try to learn from each other, to get the power to make real changes, to get rid of all this violent structures.

You depicted many scenes with human and non human, and these are scenes full of anguish. But in other scenes human and non human coexist: these are reassuring, pleasant, peaceful. Do you think it is a possible change? How long could be this transition from exploitation tocohabitation?

Good question. Like I said, I think an other relationship between humans and nonhumans is possible. If humans are to achieve a decent quality of life for themselves where they wouldn’t want to convert the planet into a scrapheap that can’t sustain them, they won’t be able to achieve this in isolation from their environment and the nonhuman animals that share this planet. We must try to distance ourselves from the  reificating form of socialization that capitalism brings about. Within this process we should consequently acknowledge that animals are no commodities and that they, like us, long for a good life. No one is free until all are free.

With the process of transforming societies to domination-free societies, in which human beings would no longer maintain the ideological separations between humans vs. animals and culture vs. nature, the infrastructures would transform as well in a way that respects nonhuman animals as subjects of their own lives. For instance roof areas could be planted and serve as new living space for other animals. Or if I imagine a decentralized, self-organized world, a lot of traffic would drop out, because of more localized economic reproduction structures. This would also mean, that all beings could move more freely because of reduced dangers caused by traffic.

In such an environment “pets” and even former “farm-animals”, which would maybe still exist, could emancipate themselves from humans step by step. But I think due to the decrease of consumption of products of animal exploitation, that should come along with a successive transition to a domination-free world, there would not be that many “farm animals” as we have today. With this process the separation between culture and nature would just vanish like the separation between “domesticated” and “wild” animals.

But I really can not tell how much time this process will take. Theoretically we could get there within a few generations – but I am afraid that would be a very optimistic estimate,

You often “choose” pigs as subjects. Why? Are the pigs the best symbol for animal exploitation?

On the one hand pigs are very often used as a speciesist metaphor – at least in the German Language. The pig-metaphor is often used to disavow people or to describe bad things. Thus the picture of a pig triggers a lot of connotations – which is always a good way to reach people. On the other hand pigs are very similar to humans – 98% of their DNA is identical to ours. Furthermore pigs are very intelligent, social, and curious animals just like humans. Because of that I thought that people can identify with the pigs on my paintings and start to reflect about their relationship to them – which is usually and unfortunately mostly mediated by means of their diets.

4 risposte a Art and animal resistance: scenes from a world without exploitation – an interview with Hartmut Kiewert