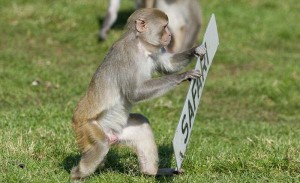 It is an imbalance of power that is immeasurable.  The unspeakable force, both material and ideological, of the structure of human power over animals.

But all prisoners would like to be free, including animals.

And the continued attempts at escape from trucks heading to slaughterhouses, from enclosures both on land and in water demonstrate this.  The majority of cases end with ‘destruction’.  Killing is not even mentioned, maybe because one ‘destroys’ an obstacle, something that gets stuck in the unrelenting mechanism of animal exploitation.

Sometimes the human reaction is one of sympathy with those who, longing for freedom, manage to gain it, if only for a moment, and are granted an unexpected ‘pardon’ and the possibility to live in a sanctuary.

But when we consider the, often dramatic, attempts at escape, how many locks haven’t yielded to the biting, how many insurmountable fences have been measured with leaps, how many ropes have resisted the strains?  How many attempts to defend their own life have resulted in them not even crossing the threshold of the prison but only to be yelled at through the bars of the truck and in those ‘non-places’ that are the slaughterhouses?

While we wait for every cage to be opened forever, let’s at least try to change perspective.  Let’s recognise the animals’ determination and potential capacity to liberate themselves.  Let’s not think of ourselves, even in our necessary and urgent action for animals, as the only liberating heroes, generous altruistic champions, but as comrades side by side in the struggle.  Certainly more ‘armed’.